Foodborne illnesses (commonly known as food poisoning) are often caused by eating food contaminated by bacteria and/or their toxins, parasites, viruses, chemicals, or other agents. Although the food supply in the United States is among the safest in the world, the federal government estimates that there are about 48 million cases of foodborne illness each year. This estimate equates to 1 in 6 Americans getting sick from contaminated food, resulting in about 128,000 hospitalizations and 3,000 deaths.

Food Pathogens occur when people eat or drink food or drink that is contaminated with pathogens, chemicals, or toxins. There are several factors that can contribute to the symptoms and severity of food poisoning, including a weakened immune system and age. When the FDA learns of an outbreak, the agency’s Coordinated Outbreak Response and Assessment Network (CORE) works closely with state and local partners and the Centers for Disease Control to identify the cause and prevent further illness. When necessary, FDA works with food manufacturers to facilitate voluntary recalls of potentially contaminated products; the agency also has mandatory recall authorities under the FDA’s Food Safety Modernization Act (FSMA). 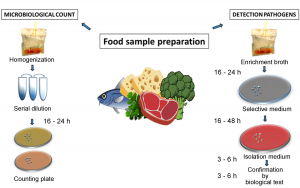 Do I have food poisoning?

Most people with foodborne illnesses get better without medical treatment, but people with severe symptoms should see their doctor.

The top five germs that cause illness from foods eaten in the United States are:

Some other germs don’t cause as much illness, but when they do, illnesses are more likely to lead to hospitalization. Those germs include:

One of the greatest breakthroughs in human history, numerous applications and improvements to the CRISPR technology have been made over the past decade. Check out our latest blog to learn more: https://hubs.ly/Q01bdx_Z0

Right now we are offering free samples on our molecular biology products including qPCRs https://hubs.li/Q01b7GvH0. Learn more about our products and what a qPCR is through the infographics below!

Am I good at reading papers? No.
But am I good at sending new paper links to my lab Slack because I scroll science Twitter all day? Absolutely.

Accidentally carmelised some glucose media in the autoclave the other day and as a guy who works with E. coli it's most definitely the best-smelling mistake I've ever made 🍪😤

ABclonal We'll be at the University of Massachusetts Amherst on May 18th and Cambridge Technology Square on May 19th. Please register for these events using the link below so that we can assist you with your lab supply needs!
https://hubs.li/Q019RKX-0