Bacteria are commonly used as host cells to make copies of DNA in the laboratory because they are easy to grow in large numbers. Your cellular machinery naturally carries out DNA replication and protein synthesis.

Bacteria are incredibly versatile organisms that have the unique ability to take in foreign DNA and replicate (or copy) it. This gives them an evolutionary advantage and helps them survive changes in their environment. For example, bacteria can acquire DNA that makes them resistant to antibiotics. The bacterial genome is contained in a single circular chromosome. This genetic material floats freely in the cell, unlike in eukaryotic organisms where the genetic material is enclosed within a nuclear membrane. Bacteria can sometimes contain smaller circles of DNA, called plasmids, that have a much smaller number of genes. Plasmids can be exchanged between bacteria in a process called conjugation.

Use of plasmids in the laboratory

Plasmids can be used as vectors to transport foreign DNA into a cell. Once inside the cell, the plasmid is copied by the host cell’s own DNA replication machinery. In the laboratory, plasmids are specifically designed for bacteria to copy the DNA they contain. 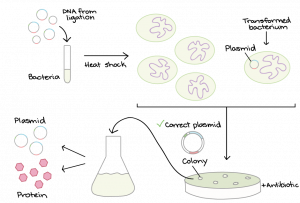 Essential elements of the plasmid

Laboratory-engineered plasmids contain a small number of genes that aid transformation. These include:

The piece of DNA or gene of interest is cut from its original DNA source using a restriction enzyme and then glued into the plasmid by ligation. The plasmid containing the foreign DNA is now ready to be inserted into bacteria. This process is called transformation.

How to know if it worked?

After transformation, the bacteria are grown on a nutrient-rich food called agar. Only bacteria that contain a plasmid with antibiotic resistance will grow in the presence of antibiotics. For example, if bacteria are grown on agar containing the antibiotic ampicillin, only bacteria that have been transformed with a plasmid containing the ampicillin resistance gene will survive. The transformed bacteria can then be grown in large numbers. The DNA of interest, or the protein encoded by the DNA, can be isolated and purified.

When is transformation used? 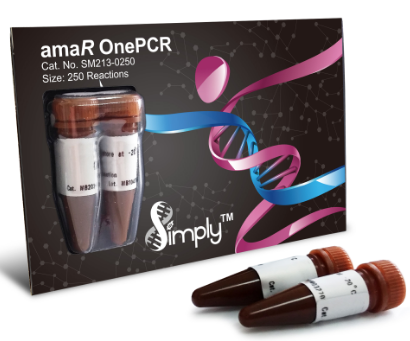 “Listen to your gut!”

I got anxiety and severe digestive health issues Brenda

Been feeling this lately with #pseudomonas and my #biofilms

With Fall🍁right around the corner, its the last chance to participate in our Back-to-School BINGO promotion! No matter how many squares you fill out, you have a chance of winning, so make sure to fill out as many squares as possible before September 30th! https://hubs.ly/Q01ng2rm0